On 12 March 2020, British American Tobacco ("BAT") announced that it had signed a new £6 billion multicurrency revolving credit facility with a syndicate of 21 banks. Under the terms of the facility, the LIBOR interest rates for sterling and US dollars will be replaced by SONIA and SOFR respectively on the first anniversary of the signing date, or (if LIBOR cessation has not occurred) at a future date determined by BAT once the bank market is fully prepared for the transition to the alternative risk-free rates. The facility will also be available for drawing in euros, and euro drawings will continue to be based on EURIBOR.

Given the recently announced recommendation by the Working Group on Sterling Risk Free Reference Rates that, after the end of Q3 2020, new and re-financed LIBOR-referencing loan products should include clear contractual arrangements to switch to SONIA or other alternatives ahead of end-2021, along with the objective of the Alternative Reference Rates Committee in the US to publish revised hardwired fallback language by 30 June 2020, there is an increased focus on LIBOR transition mechanics such as that used by BAT.

In this spotlight interview, Kam Mahil, Senior Director at the LMA speaks to: Neil Wadey, Group Head of Treasury at BAT; Anandita Khanna, Director, Leveraged and Acquisition Finance at HSBC; and Greg Brown, Partner at Allen & Overy, about the BAT facility. 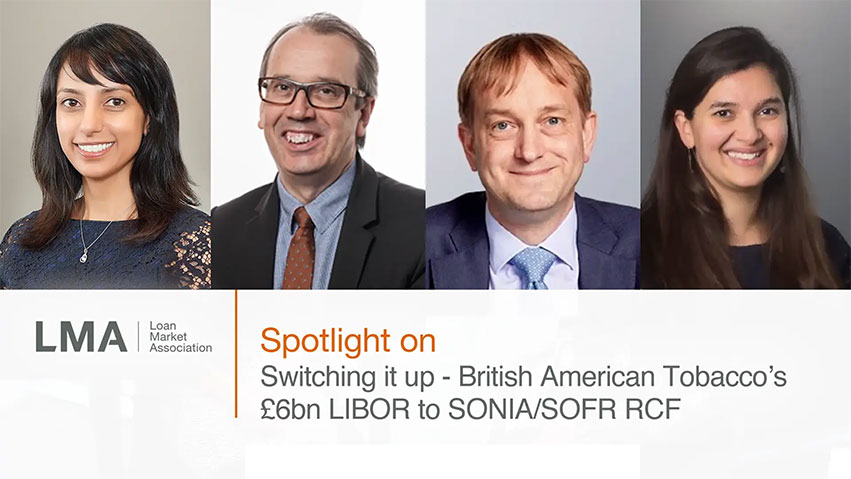