In November, we surveyed our membership on the outlook for the syndicated loan market over the next 12 months. The survey comprised 12 multiple choice questions covering both the primary and secondary markets in general, specifically real estate finance and the developing markets, and lastly regulation. The results, were collected anonymously and represent the personal views of over 500 individuals, from 29 countries, actively working in the loan market today.

The results are detailed below, along with comments from the LMA.

Question 1:
Which topic do you think will most influence the syndicated loan market over the next 12 months?
What a difference a year makes. Last year, the eurozone crisis, regulation and funding costs figured highly in our end-of-year survey. Now it is competitive pressure that is the concern (13.5% in our 2012 survey), with regulation still a factor weighing on minds (30.4% in our 2012 survey). This reflects the abeyance of economic woes, a gradual return in business confidence and a loan market that is clearly willing to lend should borrowers need to borrow.

Question 3:
What are your volume expectations for 2014 in the EMEA primary syndicated loan market?
59.1% of respondents believe volumes will increase by at least 10%, compared to 34.2% last year, reflecting the fact that, between refinancings and M&A, the market expects a busier year in 2014.

Question 4:
How many CLO vehicles will be formed in Europe by the end of 2014?
Given that we have seen 18 CLO vehicles price YTD (end November 2013) for a combined volume of €6.45 bn (source: S&P Capital IQ LCD), the survey suggests a degree of conservatism vis à vis prospects for next year, with less than 10% of respondents of the belief this can be replicated, although most expect to see up to 10 new issues. Undoubtedly the more strictly defined 5% direct retention requirement will impact issuance going forward. Reports of a continued relative dearth of AAA CLO investors may also support tempered optimism.

Question 5:
What has been the greatest influence on secondary market liquidity in 2013?
Reported secondary volumes for 2013 are likely to top US$100 bn for the first time since 2009, with our survey showing increased primary issuance as a key driver. Desks have noted offline that demand has way outstripped supply this year, however, and, with resultant rising price levels, it should come as no surprise that buy- and sell-side price expectations are often out of sync.

Question 6:
What affects settlement times the most in the current market?
Whilst having seemingly little impact on overall market liquidity, settlement times are an ongoing cause for concern. In line with last year’s survey, most respondents suggest delays are often down to insufficient pre-trade diligence. Again, it would follow that greater emphasis on preparation for the trade could positively impact the time to close thereafter.

Question 7:
What are your expectations for the secondary markets in 2014?
A busier primary market in 2014 (see Q3 above) will not see volumes increase enough to satisfy buy-side demand, according to 48% of respondents here. With demand continuing to outstrip supply, there will inevitably be a knock-on effect on liquidity (and obviously pricing) in the secondary market. 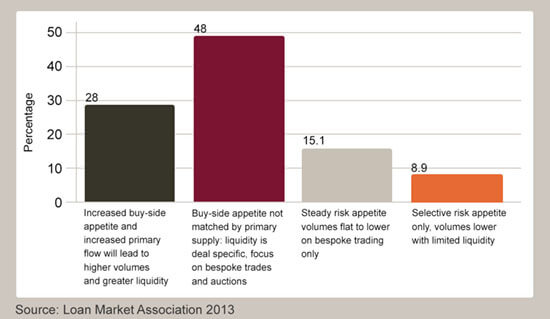 Question 8:
Do you believe the current regulatory proposals have the correct balance between preventing another financial crisis and not overly restricting economic growth?
50.8% of respondents believe the regulatory proposals following the credit crisis are, on balance, overly restrictive to economic growth, notwithstanding the need to prevent another financial crisis.

Question 9:
What do you think is the main challenge to lending in the developing markets?
The developing markets are clearly an area of opportunity for many investors, but barriers to entry remain. Of these, our respondees indicated that the greatest challenges to investment were external factors e.g. political risk (37.8%) and local legal challenges (30.7%). This is to be expected given that both the external environment and the local legal system in which developing market borrowers operate play a crucial part when it comes to assessing the likelihood of recovery prospects in the event of a default by the borrower. 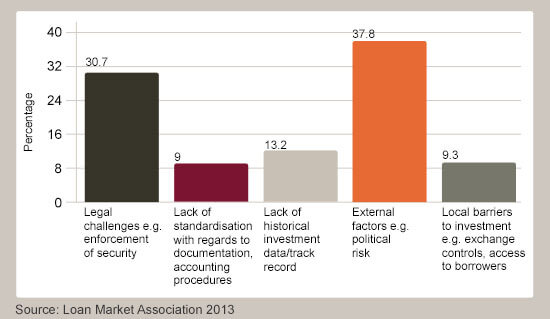 Question 10:
Where in the developing markets will the best opportunities arise?
Given the diversity of our membership base, the fact that CEE, Russia, Sub-Saharan Africa and Latin America are all considered to be viable investment opportunities is understandable. Similarly, given the recent turmoil in parts of North Africa, it is not surprising that lenders are slightly more cautious about lending to borrowers in this region.