LMA releases results of its members' survey: outlook for the syndicated loan market in 2019.

In November 2018, the LMA surveyed its membership on the outlook for the syndicated loan market over the next 12 months. The survey comprised 15 multiple choice questions covering both the primary and secondary markets in general, real estate finance and the developing markets specifically, and lastly regulation.


The results below were collected anonymously and represent the personal views of the Associations' members actively working in the loan market today. The commentary provided by the LMA compares, where relevant, the results from this year's survey with those of the previous year. To download a pdf of the results click here.

Question 1: Which topic do you think will most influence the syndicated loan market over the next 12 months?


Back in 2016, with the election of President Trump and the aftermath of the Brexit vote, 51% were concerned about the global economy and geopolitical risks. Last year, surprisingly, this reduced to 36%. However, with many predicting a slowing global economy and many of the geopolitical uncertainties still unresolved, it is not surprising that economic and political risks once again concentrate the minds of market participants. The level of concern is put into context by the fact that the influence of competitive pressures and regulatory requirements have reduced respectively from 34% to 18% and 18% to 7.5% from last year. 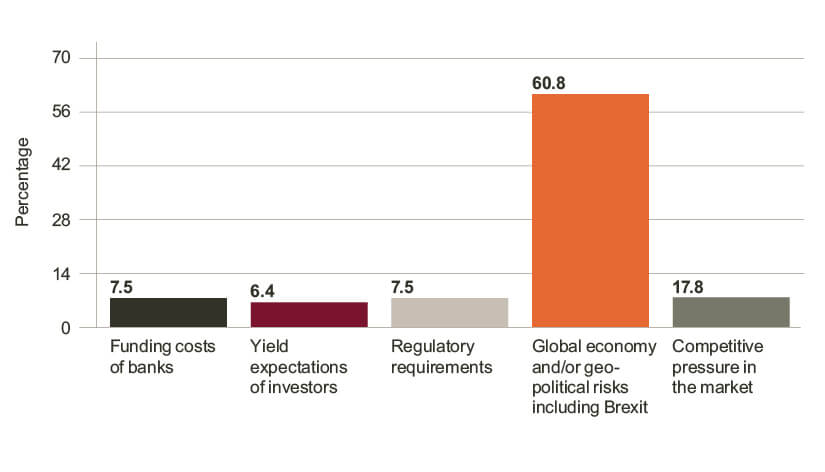 Question 2: Next year, where do you think the best opportunities will lie in the loan market?

Possibly reflecting the above concerns, restructurings have risen from 10% to 20% as the area where the best opportunities lie in the loan market. The expectations for corporate M&A are down from 24% to 17%, refinancings also from 37% to 30%. More positively, leverage is holding up at around 17% and emerging markets has increased from 11% to 16%.

Question 3: What are your volume expectations for 2019 in the EMEA primary syndicated loan market?

These remain largely in line with last year: 37% expecting an increase of more than 10%, against 35% last year and 41% expecting little change, against 47% last year.

Question 4: What will be the volume of CLO issuance in Europe in 2019?

Only 3.5% of respondents to last year’s survey predicted 2018 new CLO issuance volume would be above €20 bn. At the time of writing, however, this has reached ca. €27 bn in 65 issues from 40 different managers, easily a CLO 2.0 record. Renewed market volatility in Q4 this year and continued uncertainty in terms of what Q1 next year might bring is no doubt influencing predictions for new CLO issuance in 2019, the majority expecting significantly lower volumes. 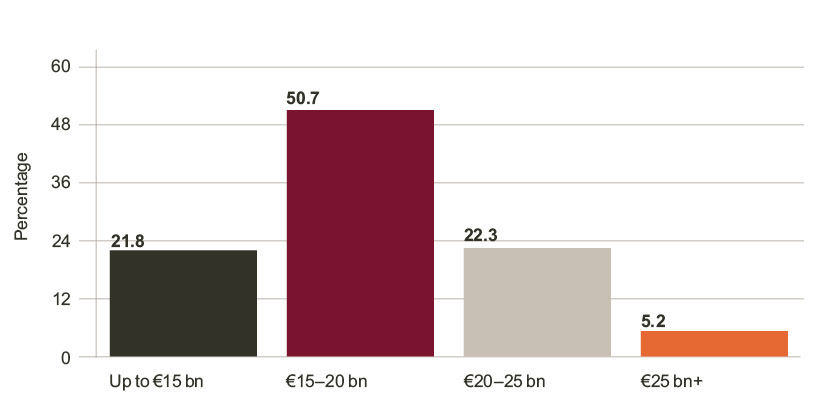 Question 5: What has been the greatest influence on secondary market liquidity in 2018?

Technicals still dominate secondary markets, generally tempering periods of volatility throughout the year. In terms of volume, 2018 will see the biggest reported trading levels in five years and the second biggest since the crisis, with primary leveraged deal flow likely to top €100 bn for the second year in a row. 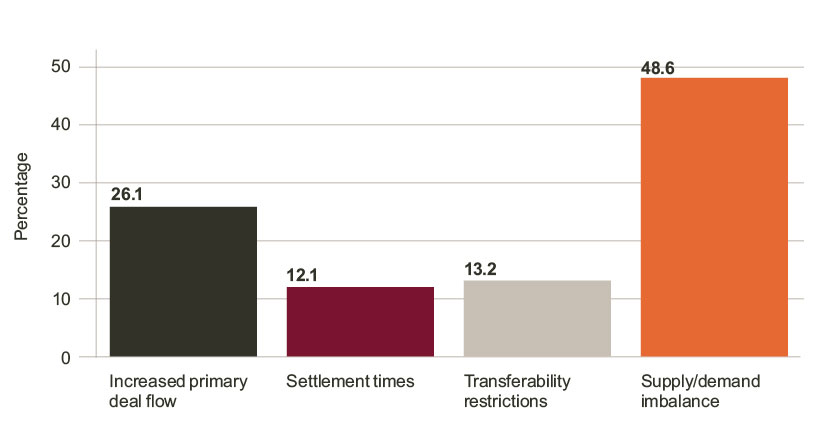 Question 6: What affects settlement times the most in the current market?

KYC delays continue to negatively impact settlement, with KYC related delays to primary closing also having a significant knock-on effect on overall settlement times, according to several institutions submitting data to the LMA.

Question 7: What are your expectations for the secondary market in 2019?

Respondents see technicals still having the biggest influence on secondary in 2019, though the potential for volatility going forward is much greater than at this time last year. This is aptly reflected at the time of writing by the European iTraxx Crossover index (high yield CDS) gapping to its widest level since Q4 2016.

Question 8: How much have the financial regulatory changes over the past five years impacted your business?

62% believe regulatory changes either materially or significantly impacted their business. The fact that this is slightly down from last year’s 69% probably reflects participants having adapted their business model to the considerable volume of regulation. But with Brexit and Benchmark reform, amongst others, still to be worked through, regulatory requirements will remain an ever looming presence. 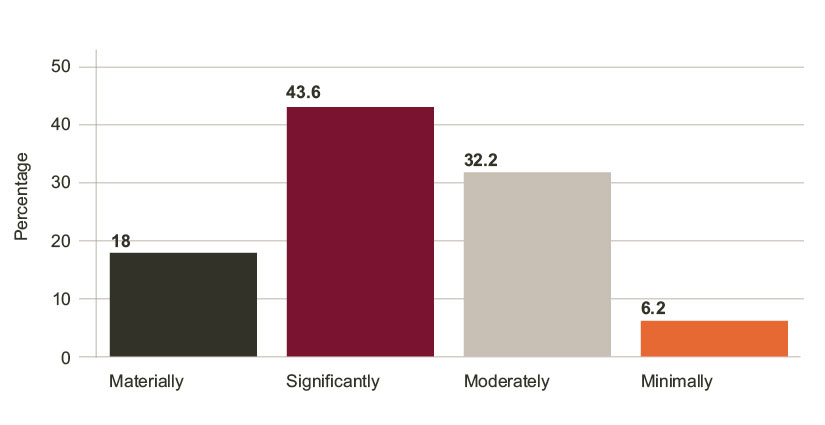 Question 9: Are you concerned about the impact of Brexit on the loan product?

Given the continuing uncertainty as to the final outcome and the closer any end game comes, it is not surprising that there has been an increase in those concerned or very concerned from 54% to 59%. The fact that 41% are not really concerned reflects the global nature of our membership, many of whom will not be impacted by Brexit. 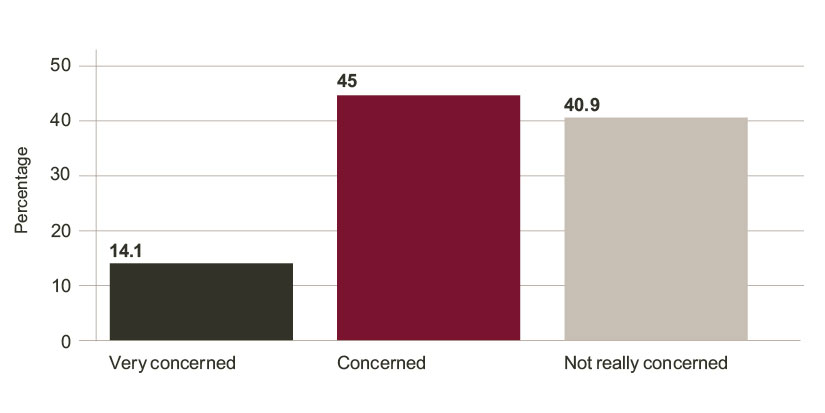 Question 10: How concerned are you about potential LIBOR/EURIBOR discontinuation?

Given that there is still no obvious alternative to LIBOR/EURIBOR for the syndicated loan markets following Andrew Bailey’s speech of July 2017, it is unsurprising to see that 62% of respondents are concerned/ very concerned about potential discontinuation. Whilst some 38% are not really concerned, this could be reflective of the view that a solution must be found. However, members should be mindful of how different LIBOR/EURIBOR and the chosen risk-free rates are, the practical impact this has and the need for the industry to be part of the solution.

Question 11: How competitive do you believe the syndicated loan market to be?

This is in line with previous years and not surprisingly shows market participants believe the market to be very competitive. A fact we hope the European Commission takes notice of, as they look to publish their study of the loan market.

Question 12: What do you think is the principal barrier to improving developing market growth at the present time?

There is little doubt that factors such as the escalation of trade tensions between the US and China, as well as the re-introduction of Iranian sanctions by the US, are likely to have a negative impact on developing markets, and it is therefore unsurprising that respondents this year selected both “economic uncertainty and trade wars” and “compliance, sanctions and regulatory requirements” as being the two greatest barriers to DM growth. This contrasts to 2017, when geopolitical risk was the prime area of concern. Although political uncertainty is still considered to be a barrier, with 22.9% of respondents selecting this option, the post-election cycle and the stabilisation of the political environment in certain key DM jurisdictions has meant that this is less relevant at the present time. 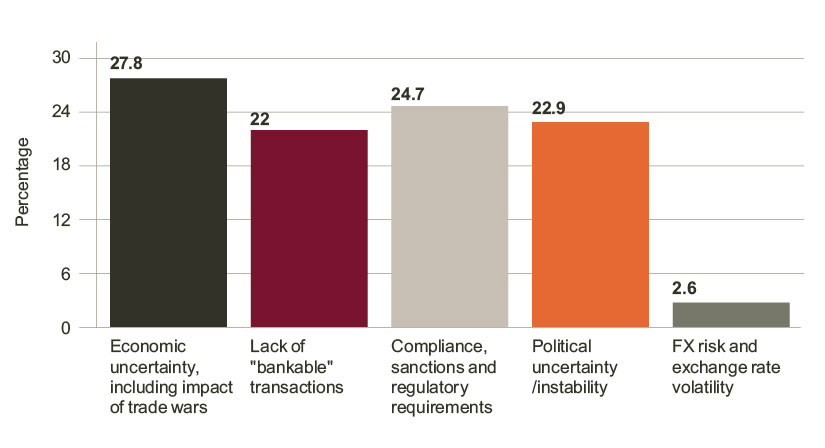 Question 13: What do you think is the most important factor supporting developing market lending at the present time?

As was the case in 2017, the results of the survey demonstrate that there is no obvious single solution when it comes to supporting developing market lending. However, the work of the LMA is clearly a vital part of the process, with the highest proportion of respondents (26.2%) believing that standardisation of loan documentation and practices is the most important contributing factor. In second place is international investment via commercial banks and funds, highlighting that whilst other market players such as domestic lenders, ECAs, DFIs and insurance providers play an important role in the credit risk mitigation process, the success of their contribution is ultimately predicated on there being available liquidity from international sources. This is likely to be important in the coming months, since if there is a retrenchment of international investment as a result of trade wars, sanctions, or otherwise, developing market loan volumes could be severely impacted. 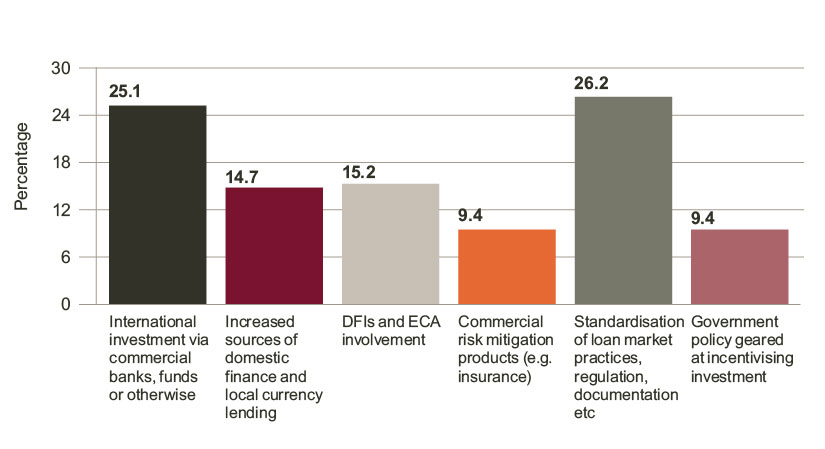 Question 14: Which will be the hottest UK real estate finance sector in 2019?

Given the increasing demand for online deliveries, it is no shock that logistics is viewed as the hottest real estate sector going into 2019, with a preference for long leased assets to anchor tenants following closely in second place. 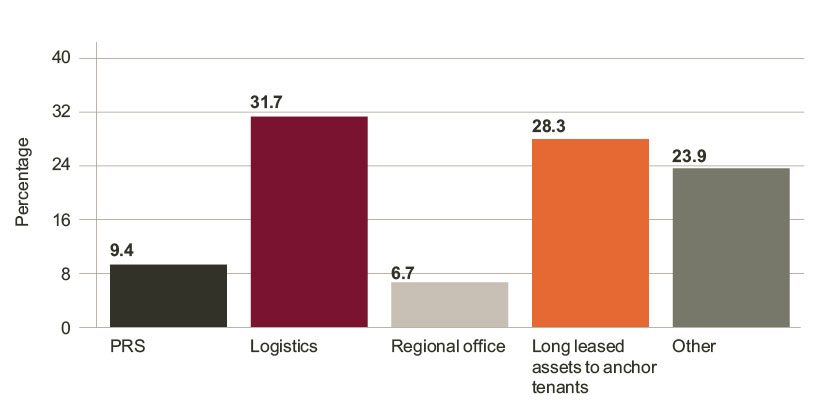 Question 15: What do you think will be the greatest challenge for the European real estate market in 2019?

In a market already supporting a very healthy amount of competition, it is not surprising that this option is rated the greatest challenge going forward, particularly given the impact macroeconomic and political uncertainties are having on companies’ willingness to borrow. 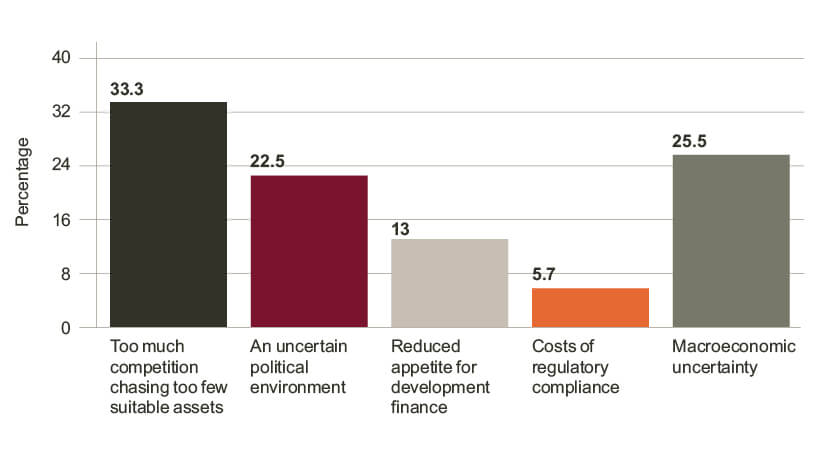