In November 2016, we surveyed our membership on the outlook for the syndicated loan market over the next 12 months. The survey comprised 12 multiple choice questions covering both the primary and secondary markets in general, real estate finance and the developing markets specifically, and lastly regulation. As we are also celebrating our 20th anniversary, we added three questions looking further ahead at the state of the loan market in the next 20 years.

The results below were collected anonymously and represent the personal views of our membership working in the loan market today. To download a pdf of the results, click here.

Question 1: Which topic do you think will most influence the syndicated loan market over the next 12 months?


Not surprisingly given the events of the past year, not least of which are the Brexit decision in the UK and the election of Donald Trump as President of the US, global and political risks have jumped significantly from 34.8% (2015) to over 50% this year, as most likely to influence the loan market in 2017. With elections in Germany and France to come, the impact of the referendum result in Italy, the Chinese and many other major economies slowing, commodity prices volatile, Middle East conflict, Russian relations with the west poor and the potential for political fragmentation in Europe, not to forget the ongoing terrorist threats and a refugee crisis – we clearly live in uncertain times. 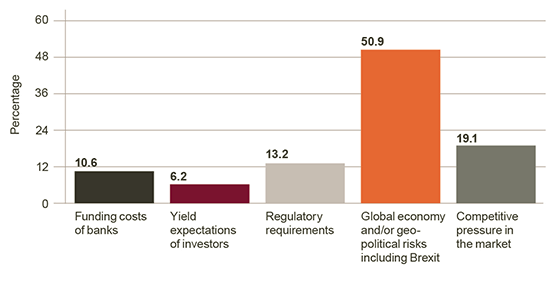 Question 2: Next year, where do you think the best opportunities will lie in the loan market?


The response to question one is partly behind the drop in the expectation from 32% (2015) to 27.9% that corporate M&A will provide the best opportunity next year in the loan market. Borrowers are less likely to invest and acquire in uncertain times and this accounts for the drop in expected M&A. Other areas remain largely as last year, with only Emerging Markets rising from 7.6% (2015) to 12.3% making any noticeable gain.

Question 3: What are your volume expectations for 2017 in the EMEA primary syndicated loan market?


The optimists are losing confidence, with a decrease from 30.8% (2015) to 25.3% in those expecting an increase in volumes of more than 10% next year. This is hardly surprising given the response to the opening question of this survey and the resultant second which reflects it. A reliance on refinancing, in the absence of a significant pick up in M&A will likely leave the market flat, as expected by 52.1% of respondents.

Question 4: What will be the volume of CLO issuance in Europe in 2017?


European CLO issuance in 2016 has easily set a new post-crisis record and may reach €17 bn by year end, strong demand for AAA notes seeing spreads breach 100bps in the 2nd half of the year. Just over 70% of respondents do not see this kind of volume being replicated in 2017, partly a reflection, no doubt, of supply issues in the underlying loan collateral.

Question 5: What has been the greatest influence on secondary market liquidity in 2016?


With most "flow" names seeing a bid above par it is unsurprising that the supply/demand imbalance has a clear majority here. LMA and other data show traded volume lower each successive quarter in 2016 and year on year, emphasising the supply issue.

Question 6: What affects settlement times the most in the current market?


No prizes for what most consider to be the main issue affecting settlement times in 2016, KYC taking more of the vote than last year. The LMA Operations Committee has worked to identify and quantify delays in the settlement process and certainly KYC issues have a major impact. In line with 17.4% of respondents, we see that operational process gaps also contribute to significant delays and are perhaps easier to plug.

Question 7: What are your expectations for the secondary market in 2017?


With one eye on the potential for volatility, a regular feature in secondary in the post-crisis era, the survey suggests the current technical market imbalance will persist in 2017, the only gravitational pull on secondary pricing likely to be the risk of refinance.

Question 8: How much have the financial regulatory changes over the past five years impacted your business?


The impact of regulation continues to be pervasive and significant. Whilst those saying that the impact is material is slightly down from 27.2% (2015) to 24%, probably reflecting that the initial shock is reduced as businesses adapt to the new environment. However, the fact remains, 69% believe regulation impacts their business significantly or materially. Significant regulation is with us to stay and its impact will increasingly bite.

Question 9: What do you think is the principle barrier to improving growth in developing market lending at the present time?


Perhaps unsurprisingly, a key factor believed to be impeding growth in developing market lending at the present time comes as a result of an uncertain geopolitical environment and concerns surrounding political instability. Clearly, a combination of Brexit, the US presidential results and upcoming elections in many developing market countries in 2017 have meant that politics and the role of government are at the forefront of lenders' minds when considering where best to invest.

Question 10: What do you think is the most important factor supporting developing market lending at the present time?

Standardisation of documentation, regulation and market practices is considered to be the most significant factor supporting developing market lending at the present time, highlighting the vital role of organisations such as the LMA in these jurisdictions. Financial products offered by DFIs, ECAs and insurers are also seen as being particularly important, as risk mitigation continues to be a key area of focus for lenders. That said, despite the uncertain political and economic backdrop that has undoubtedly resulted in increased focus on legal and commercial risk, international investment into developing markets continues to be considered as an important source of finance, ahead of that provided via domestic banks. 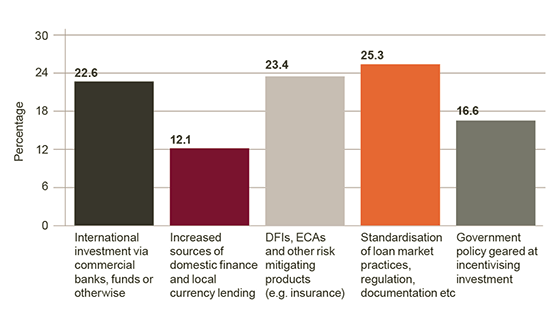 Question 11: In which types of commercial real estate assets do you see the greatest potential for growth?


Given the number of macroeconomic uncertainties on the horizon, it is no surprise that prime property, often in perceived "safe haven" cities, is seen as that with the greatest potential for growth. Investment in alternative sectors also continues to remain strong. 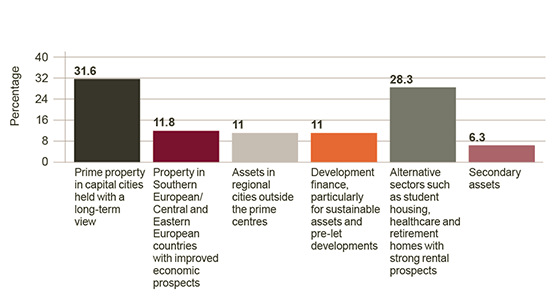 Question 12: What do you think will be the greatest challenges for the European real estate market in 2017?


With Theresa May pledging to trigger Article 50 by the end of March 2017, it is no surprise that macroeconomic uncertainty has been voted the greatest challenge for the European real estate market going forward. Aside from that, competition for real estate remains strong across Europe, with a shortage of suitable assets amid surplus demand having the potential to create an overheated market in 2017.

Question 13: In which region do you see the greatest growth in the syndicated loan market over the next 20 years?


Asia and Australasia are expected to record the greatest growth over the next twenty years. Interestingly Africa, which has the greater demographic and economic potential for growth, is seen only in fourth place behind the whole of Europe and the CIS.

Question 14: How much will the lender/borrower relationship change over the next 20 years?


This is one of the most talked about topics in the loan market, with most people recognising that loans are a relationship driven product, with the only debate around the degree as to which this favours one party or the other. Most lenders would say that the relationship is largely in favour of the borrower, with loans priced to maintain the relationship, and so facilitate the chance of the necessary ancillary business. However, many have questioned how sustainable this model is, and the answer to this question would indicate that 50.2% believe it is not sustainable over the medium to long term and that a material or significant change is likely over the next 20 years. However, an almost equal number believe there will be only a moderate or no change in the relationship. The debate is therefore likely to continue well into the next twenty years!

Question 15: What will have the biggest impact on the loan market in the next 20 years?


In a Bitcoin and Blockchain world it is to be expected that technological innovation should be seen as most likely to impact the loan market in the next twenty years. Not least because in certain areas our product has lagged behind others in fully embracing technological opportunities. The fact that regulation is only 5% behind emphasises the need for the product to improve efficiencies as regulatory requirements will increasingly weigh on the product and the whole of the financial services industry in the coming years and operational improvements will be required to maintain competitiveness.